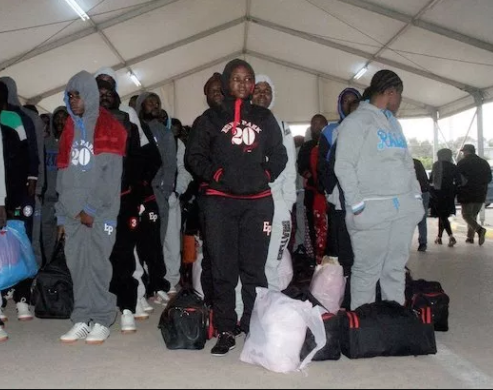 241 Nigerian women including five nursing mothers were repatriated to the country on Tuesday following their failed attempt to take the illegal Libyan routes to Europe.

According to the National Emergency Management Agency (NEMA), a total of 257 Nigerians offered themselves to be returned to the country with assistance of the International Organisation for Migration.  They were transported in a chartered Airbus A330-200 flight with Registration number 5A- LAT at 9.15pm therough the Murtala Muhammed International Airport, Lagos.

The returnees, among them two children, four male adults, four teenage boys, were received by Suleiman Yakubu, the Zonal Coordinator of NEMA Southwest.  Yakubu enjoined the returnees to embrace the change mantra of the federal government.  He urged them to remain positive and focused on contributing their quota to national development, instead of seeking greener pastures where it doesn’t exist.

Yakubu noted that they would not be treated as second class citizens in their own country, unlike what they face abroad after migrating illegally.  He disclosed that the European Union was providing the reintegration assistance, urging them to make use of the initiative and better their lives.