Home / Forum / Latest News / Celeb News / Submit Your Post / Contact Us
Home Local News Photos: Police release report on the death of Corps Member, Ngozi Onyekwere
Share on Facebook
Tweet on Twitter
26-year-old National Youth Corps member, Ngozi Onyekwere died in a road accident at Uyo on June 23. The Accounting graduate from the University of Port Harcourt, who was to pass out from the scheme in August, was returning from her workplace at the government house when the crash occurred. She’s since been buried at her hometown in Ahiara, Imo State. However, the family insists she was burnt by a mob hence the investigation into her death. After the cut is a detailed report released yesterday, August 17, by Complaint Response Unit(CRU) of the Nigeria Police Force… 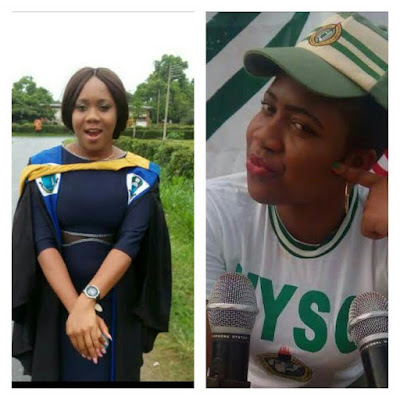 “This report is sequel to a complaint of alleged police inaction brought to the notice of the NPF-CRU after a post on Social Media dated 8th July, 2016 of alleged Akwa Ibom state police refusal to apprehend a group of angry villagers who were alleged of setting a female road traffic accident victim named Ngozi Onyekwere ablaze. 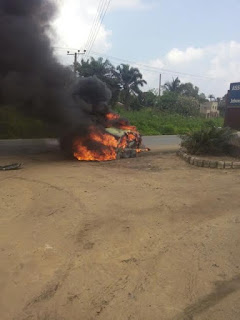 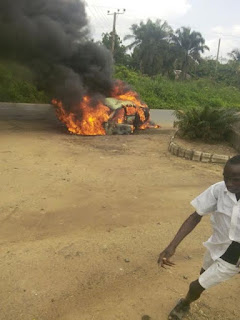 Based on the said viral social media post, NPF-CRU registered the case as a complaint of “Police Inaction” with tracking number #CRU278939.
The Commissioner of Police Akwa Ibom State Command was contacted, a detailed investigation was carried out regarding all allegations made in the said post.

Investigations reveals thus;
1. That on 22.06.2016 at about 2:00pm Police received the report of a lone fatal motor road traffic accident along Mbiereke/Ikot Oku Nsit Road, Mbiokporo Nsit 1, Nsit Ibom Local Government Area of Akwa Ibom State involving one Toyota Camry car registration number KJA 473 DW [LAGOS] and a 10-year-old pedestrian boy who was struck by the car as he was returning from school. That the boy died on the spot due to his injuries and the vehicle went up in flames upon impact into a nearby gutter with one of the passengers trapped underneath the vehicle.
2. A team of Traffic Police officers and other emergency responders were immediately dispatched to the scene where the burnt vehicle was met with a part stuck in the gutter with what appears to be a burnt human remains trapped under the vehicle in the gutter. The victim was burnt beyond recognition before the arrival of the fire Service personnel.
3. The driver of the vehicle one Dr. Ugochuchwu Raphael Eze (a medical doctor and National Youth Service Corps (NYSC) member) and a male passenger in the vehicle (also a medical doctor) were met at the scene as well as other eye witnesses. The driver stated that he suddenly lost control of the vehicle and that led to knocking down the boy.
4. The burnt corpse of the other passenger was recovered from underneath the accident vehicle by the emergency responders and the driver identified her as Miss Ngozichukwu Philomina Leriakawa (referred to as #NgoziOnyekwere in the social media post) also NYSC member serving in Akwa Ibom and remains of the 10-year-old boy found by the road side were removed and deposited at the mortuary. The road was cleared and made safe for traveling after the performance of required police traffic investigation procedure.
5. Both survivors of the accident – the driver and the passenger both friends of the deceased Ngozi and other witnesses at the scene stated that the driver and one of the passengers were able to exit the vehicle which busted into flames upon its impact in the road side gutter after hitting the boy. That the deceased was unlucky as she somehow got trapped under part of the vehicle inside the gutter as she tried making her way out of the burning vehicle. Both survivors and bystanders helplessly watched the vehicle burning with the trapped victim.
6. Both survivors were taken to St Luke’s Hospital Anua, Uyo for medical attention. The passenger was treated and discharged while the driver was referred to Orthopedic Hospital Enugu for spinal cord injuries based on the recommendation of medical doctors in the hospital. Hence driver was granted police administrative bail to enable him attend the hospital.
7. On 29.06.2016 a post postmortem examination was performed on the deceased Ngozi at University of Uyo Teaching Hospital (UUTH) Uyo and corpse later released to her elder brother one Obioma Leriakawa who represented the family and Mr Udo Boniface an official of NYSC Akwa Ibom State for burial.
8. A full report on the incident based on eyewitness statements – two survivors who are friends of the deceased and independent witnesses, as well as cause of death as stated in the autopsy – has since been shared with the family of late Ngoz and NYSC Akwa Ibom State.
9. That on 29th July, 2016 the family of Late Ngozichukwu Philomina Leriakawa (#NgoziOnyekwere) informed the Divisional Police Officer (DPO), Nsit Ibom in Akwa Ibom State that they have resolved to opt for “a peaceful settlement” with Dr. Ugochukwu Raphael Eze – driver of the car – and that they wish to withdraw from further police actions or any court proceedings against the driver regarding the death of Ngozi (#NgoziOnyekwere).
10. The family of the late 10-year-old boy had earlier submitted same request as stated in S/No.9 above to the police and backed with a Court Affidavit in respect of the case.
Based on the foregoing, NPF-CRU has since closed case – CRU278939 and alleged inaction against the police referred as false.
The victim was not set ablaze by a mob, the motive behind the continuous misinformation of the public by some individuals on the social media remain unclear. The family of Miss Ngozichukwu Philomina Leriakawa (being referred to as #NgoziOnyekwere) is fully informed of the circumstances of this case.
May the souls of the victims of this road traffic accident rest in peace.