Germany has qualified for the finals of the football event at Rio 2016 after demolishing Nigeria 2-0 in the semi-final tonight August 17th.

The Germans scored in the 9th minute through Lukas Klostermann and pressured from then on as the Nigerian defensive line looked shaky and lacked some solidity, if not for the hard work of Troost Ekong at the backline, the African champions would have conceded more goals… 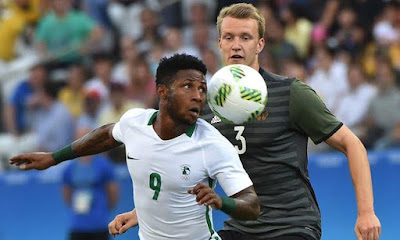 At half time, Germany led Nigeria 1-0  but Nigeria created a few chances in the final 10 minutes to give their opponents something to think about at the break.
The second half started with Samson Siasia not making any change and the team showed some liveliness and more tactical awareness after the break. But after some indecisive play by Nigeria’s front line through out the second half, they were made to pay for their blushes by Nils Petersen in the 89th minute after a stunning counter attack that left only Troost Ekong as the defensive cover for Nigeria’s goalkeeper.
Nigeria’s players looked distraught at the final whistle but will have some consolation in the fact that they will play Honduras in the third place match for a Bronze medal.
They didn’t have it all their own way but eventually Germany saw off Nigeria and will play Brazil at the Maracanã in a mouth-watering gold medal match two years on from that famous 7-1 thrashing in the 2014 World Cup.
Congratulations to our Nigerian players, they tried to get this far!
Online Shopping - Zuta.NG
Comment Rules Your comments must be more than 10 characters.
Multiple Comments are not allowed on this post.
You should never copy a user's comment. Affected members will be suspended for a week and earnings will be forfeited
Non thought provoking and useful comments such as awwwww, niceee, hehehehehe, hahahaha, congratulations to them etc not allowed.
You should never split one comment into multiple comments,eg A, B, C. He, Said, That.
Comment reply does not attract any earning! You can reply to comments as much as you like though.
Click here to read our Terms of Service
Subscribe to Blog via Email
Recent Posts